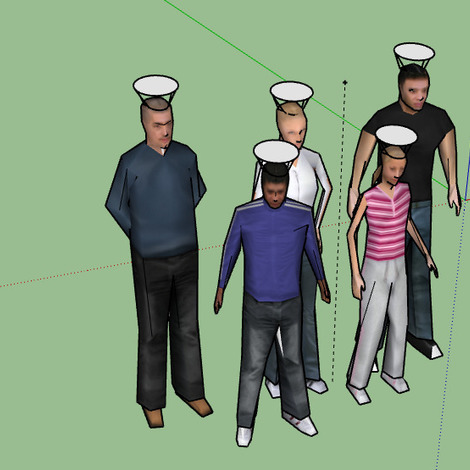 The albedo effect is a positive feedback loop in which snow and ice reflect the sun’s energy, cooling the atmosphere and preserving sea ice, glaciers, snowpacks, etc. Under ordinary conditions this process should regulate the earth’s temperature. But in the age of climate change and the Anthropocene, the greenhouse gases trap heat and cause ice and snow packs that have been deflecting solar rays for millions of years to melt and give way to more heat absorption, warming the earth further.

This is, naturally, not an awesome thing to talk about. We would like to facilitate constructive conversation and engagement with the topic of climate change and its local effects with people in the Triangle in a way that is fun and playful while respecting the gravity of the situation that we find ourselves in. We would like to hold a series of outdoor, public workshops where participants will be instructed in creating their own albedo hat. The hats will be constructed from everyday objects and participants will have ample opportunity for personalization of their hats. The hats will then be coated in albedo reflective spray. The workshops will culminate in an interactive performance piece, in which hat-makers will gather close together to converse about climate anxieties and ways that climate change has affected their lives while reflecting the UV light with their hats. This collaborative action is a playful, surreal entry into serious conversation about climate change. The workshops and reflection will take place outdoors in downtown Raleigh, where paved surfaces absorb heat and warm the area. We would like to hold 3-4 workshops in the spring and early summer, with the discussion held in the middle of the summer when the sun’s rays are the strongest.