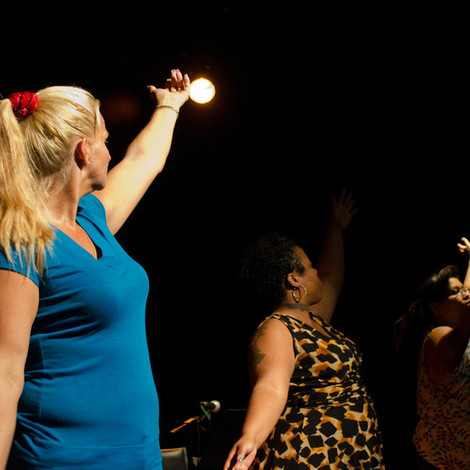 Picture this: five women standing on a bare stage telling stories about their hopes and dreams, their lives and histories. They’ve spent years in and out of prison but they’ve survived and they all want another chance. Now picture an audience outside jail applauding, and, in so doing, validating these women’s efforts, creating a community of support in that performance space. For years, Conspire Theatre worked mainly inside the jail. Now it’s time to step outside and connect with women after their release with our show Performing Possibilities.

Conspire will bring a group formerly incarcerated women together with local artists for an intensive three day weekend in July 2013. Using techniques we’ve perfected creating theatre in jail, we’ll interview the participants and use the resulting stories to create an impactful performance together. High production values are guaranteed by the musicians and theatre artists from the Austin community committed to the process. On Sunday evening, we’ll take the stage together before an audience of family, friends, Conspire supporters, and the Austin community. After the performance, the audience and workshop participants will be invited to a communal meal where they can engage in a facilitated discussion about the performance with the creative team.

Performing Possibilities will provide a space for formerly incarcerated women to discuss and analyze their experiences in a supportive, positive community. Community is necessary for women after prison to reduce recidivism and to create healthy relationships, especially as they face barriers and discrimination because of their criminal records. In order to succeed, they need to know that they have support. Performing Possibilities will bring the work Conspire Theatre does inside prison to recently released women, helping them to imagine a future in the free world.