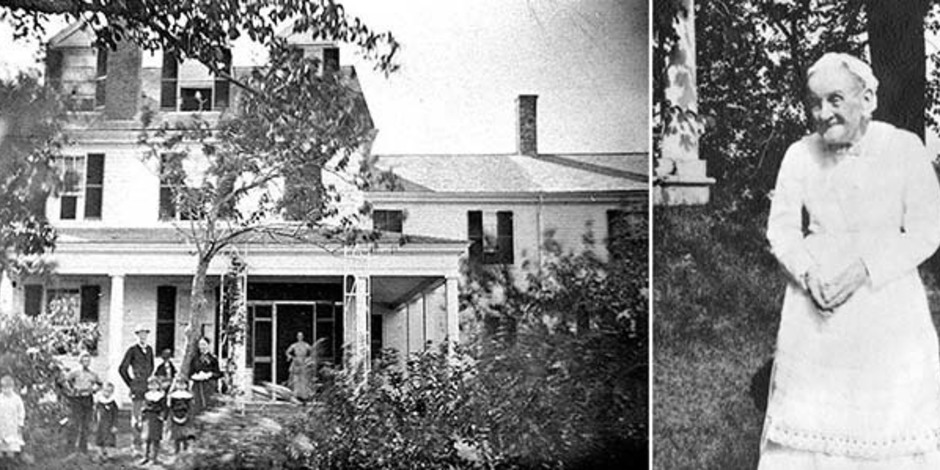 Called by an antique dealer who knew I specialllized in textiles, I bought this 'fabric diary' with 275 calico swatches, hand sewn into the.diary & notated crow-quioll ink, its number, who cut the dress, who sewed it together and where she wore it. I spent a winter transcribig the handwriting and we made a facsimile including swatches of the fabrics in the diary. I began to call all thehistorical socieites and useums north of Boston because she mentioned. some dtores where she bought her fabrics, Debra Goodwin of the Cape Ann Historcal Museum asked me to read some family names and she told me to come down to. the museum and she would identify the exact name of the person .who wrote it .The name was Charlotte Augusta. LaneShe who also wrote essays and poetry. Upon her death they made a manuscirpt ,The house is still standing, built onthe homestea in 1833. The diary of Capt.Oliver Griffin Lane
was still in the house owned by Al Duca who helped me trace more of Aunt Tot's history. I moved to Glouester for one year and now 40 years later am stll here, I joined the Costume Society of America giave a paper at the 1990 annual Conference in Bsoton. Was iinvited to present Aunt Tot at local churches. 4 antique stores,the Sandy Bay Hsitroical Society, Rockprt and the DAR, a sewing class at Rockport H.S. using photos of my 19th calico day dresses, as visuals..I , includied her poetry and essays while I was speaking.. All were in tears and the curator from the Metorpolitan Museum suggested we meet about doing a book!and perhsaps an exhibition of 19th century Day Dresses. I ahd an idea of makeing the exhibition like the small village streets and houses of Annisquam on the Cove and the Annisquam River to Ipswch Bay and the Atlantic Ocean.