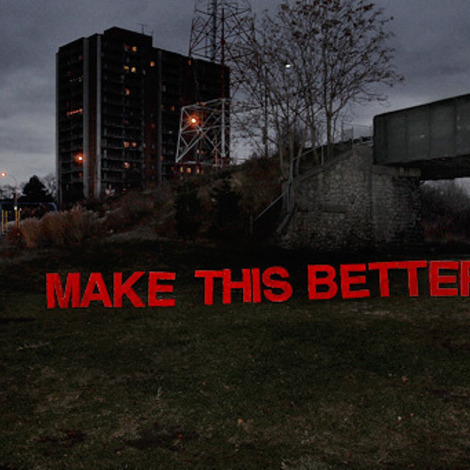 Phase I: The downtown Parramore neighborhood in District 5 is an undeserved low-income population, currently facing urban redevelopment. Citizens are projecting a numerous range of emotions such as anxiety, stress, fear, and anger relating to the renewal process. Through, "If Parramore Could Talk…What Would It Say?", we are giving student residents a voice funneled through the neighborhood. If Parramore could talk, what would it say? It would say, “Dream Here”, “I Am Not Broken”, “I Am Strong”, “Everything is Going to Be Okay”, “Respect Me”, and so on. After deciding on the phrases, the students will begin constructing three-foot tall letters that will form inspiring slogans spoken by the Parramore neighborhood. Residents, business owners and the City of Orlando will permit our group to place the phrases throughout the area. The oversized words will provide a moment of relief and glimmer of hope from the overwhelming stresses of life, while giving the kids a chance to speak out.

Phase II: Photography students, from a PLHP after-school program, photograph the oversized phrases strategically placed in Parramore. The photographers then place the photographs in a 32-page sketchbook, purchased from the Brooklyn Art Library. After filling the sketchbook with photographs and other media depicting a living historical Parramore, the book is returned to Brooklyn where the works are digitally scanned for worldwide access. In addition, the sketchbook tours nine North American museums located in the following cities: Seattle, Los Angeles, San Francisco, Austin, Atlanta, Miami, Chicago, Toronto, and Brooklyn, in 2015. Currently, the Brooklyn Art Library has accumulated 30,000 books from 135 countries.

This project is providing a voice, relief, hope, and solidarity for Parramore residents, and while supplying international digital access to the photos through the Brooklyn Art Library. The convenience of this project overcomes time and location restraints.