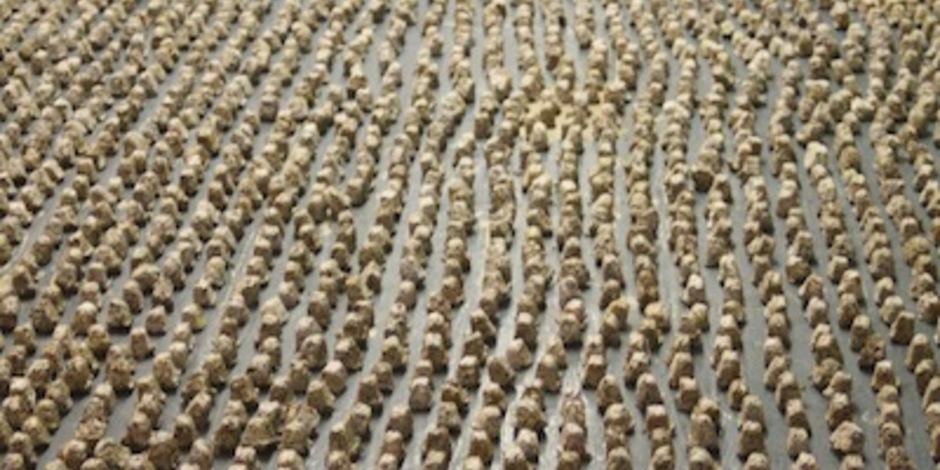 I just finished a project whereI took the square footage of a luxury condominium building that is now in the gentrified Cabrini Green area and I translated it to an amount of seed bombs, which was about 100,000 square feet. (Which are pellets of inert matter and in this case mid-Western Wildflower seeds.) I then planted them in the Englewood and Austin neighborhoods of Chicago which is where a lot of people who were pushed out of the towers ended up.
This is to say that there will be one hundred thousand square feet of Austin and Englewood covered in flowers.

For this project I will be constructing 2.3 million seed bombs, out of clay and a single perennial sunflower seed.
There are 2.3 million people in prison in the U.S. I believe a number like that is impossible to understand until you see it. And after viewing the bombs the viewers will be able to take home the bombs and plant them, making visible a hidden population. The sunflower will be a symbol of transgression against the prison industrial complex and rebellion against the over jealous and class and race motivated criminal justice system. I will construct them in a storage facility that will be about the size of prison cell. My term will last roughly two years in which I will spend ten hours a day, once week, making the bombs--so about twenty thousand a day.
It will be partially a performance art, guerrilla gardening, and a sculpture show.
I want to educate people about the life of the prisoner starting with a collection of letters I have been writing with prisoners allowing them to conduct their own interviews from inside their cells, telling their own stories in their own words.