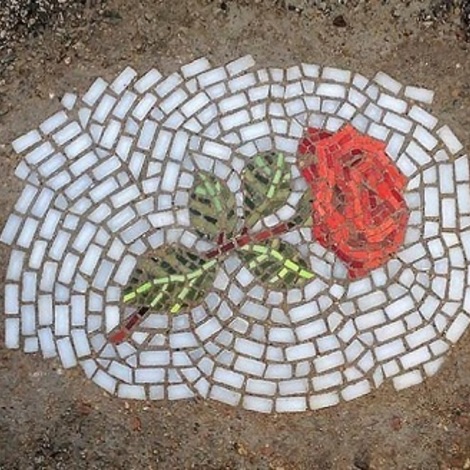 3 years ago, Chicago-based mosaic artist, Jim Bachor got tired of his city’s pothole problem and started installing his beautiful mosaics in them, making them more than just axle savers. 3 successful Kickstarter's in, and he's become well-known nationally for these outdoor art installations. He's hit Chicago's list of the city's greatest public art.

The first year his theme was flowers -- long stemmed vibrant roses, tulips, and lilies burst out of Chicago streets. The 2nd yr, the pothole installations were called 'Treats in the Streets'. A perfect name for the creamy white tiles bordering brightly colored popsicles seemingly tossed off a Good Humor truck -- that year Finland invited him to continue the series there.

He creates mosaics that speak of modern things in an ancient voice. His work surprises the viewer while challenging long-held notions of what a mosaics should be -- just like our other mosaic rock star, Isaiah Zagar. Hundreds if not thousands of tiny, hand-cut pieces of Italian glass and marble comprise his work.

We've been watching Jim's series since the beginning. The public loves him and the press (including The Inquirer, who called him up to see if he'd thought about bringing the project to Philadelphia).

We're excited to say we've arranged to bring Jim's project to Philly in August! He'll to do a handful of installs with imagery synonymous to Philly, in selected neighborhoods. Not only will we fill a couple of car breakers, but what a delight and surprise it will be for people to look down and see these beautiful mosaics in a city that already has a bond to that artform.

There will be fun interactive supplements to this project including an art scavenger hunt - residents can win fun signed art prints from Jim for finding the mosaics. An artist talk/ Q&A with Jim will take place at a local gallery so the community (families will be targeted for this fun chat) can learn more about the project and ask questions.