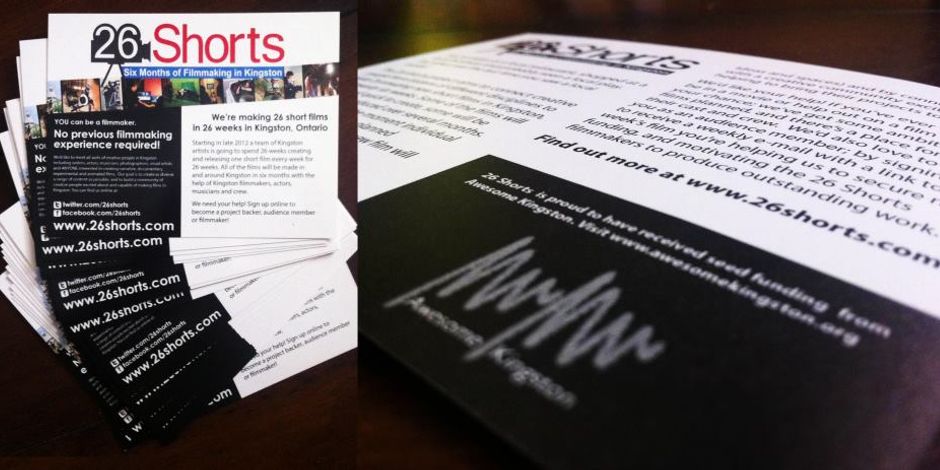 26shorts is a project to help creative people in Kingston make films.

Starting in late summer 2012, a team of Kingston artists will spend 6 months releasing one short film a week for 26 weeks. All of the films will be shot in and around Kingston during the 6 month period of the project, using Kingston film makers, actors, musicians and crew.

Some of the films will be simple and quick to create, some will be ambitious and produced over several months. Some will be spur-of-the-moment individual projects, some of them meticulously planned collaborations. Every week, one new film will be released online.

The 26shorts project gets its inspiration from a popular type of photographic study called a "365 project", during which photographers commit to producing one photo a day that is outside their normal type of work. The focus of a 365 project isn't necessarily to produce outstanding new portfolio pieces every day, but to challenge the photographer to take risks and to expand her body of work. We've also been inspired by the idea of a "48 hour film festival" where random teams of film-makers collaborate to write, shoot, edit and submit a narrative film for judging in just two days. 26shorts retains that focus on networking and spontaneity but adds more time for for more ambitious projects, the opportunity to participate in more than one film, and the creation of a network of artists that can grow over time.

The project will encourage artists to benefit from the process of making the films, always striving to achieve the best possible product and often choosing to take creative and technical risks where possible.