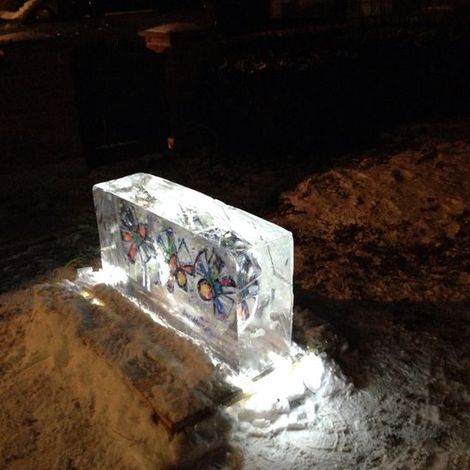 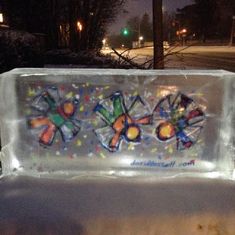 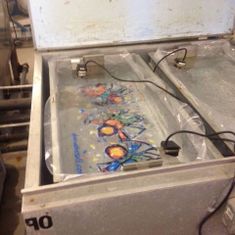 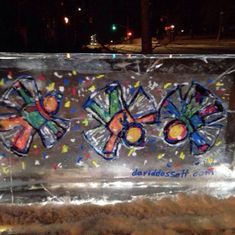 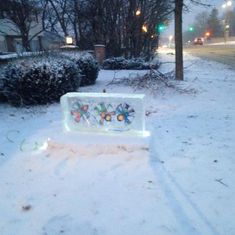 "Froid'art - Art on Ice" - An public outdoor ice exhibit. That's my idea. It's new and has not been done here before. Think of a clear paperweight. Embedded in it is a piece of art on a sheet of Mylar. Now imagine that paperweight as a block of ice, 20" x 40" weighing 300 pounds, sitting outside on a platform, illuminated by tube LED lights.
Now picture several of these blocks of ice - each featuring art by a different local artist. In future these blocks of ice could be located in Confederation Park, in the market square, on the un-ploughed boulevard portions of the sidewalks in front of downtown bars and restaurants. But this year my goal is to have them in front of the old homes close to the downtown.
Froid'art - Art on Ice outdoor art gallery is not just a concept. It can be done. I had one of these blocks made with my art and it is on display now on my front lawn on King Street at Sir John A. I posted pictures and information on my Facebook page and the reaction has been amazing. "Wow" is the general reaction, especially to the night pictures. Take a look!
This is a special kind of project. To get a large, solid block of crystal-clear ice and have my art suspended in it I had to go to a company that specializes in this kind of thing. That company is called IceCulture and they are located in Hensall Ontario. They are experts at this. It takes special equipment and a precise and slow process to make crystal-clear ice. They are the folks who provided the ice and expertise for many special projects including the Chill nightclub in downtown Toronto, the Canadian Tire Ice Truck, and the special ice bullets for NASA to test the shield on the Space Shuttle. A block of ice costs $80. To suspend the Mylar in it is an additional $80. Delivery of the block was $125. The total cost would drop to approximately $250 per block for ten of these blocks. Of course, all who help, especially the Awesome Foundation, will be given due credit and thanks!