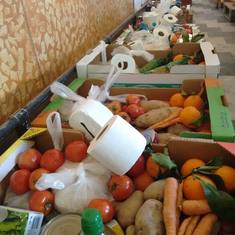 We provide hot vegan meals on a daily basis for refugees stranded on Lesvos. Since the distribution happens regularly every evening, it is also important as a social meeting point for refugees, and a place for refugees and European volunteers to connect with each other. For the last two weeks we have been cooking 70 extra meals daily to support a group of refugees occupying a square in the centre of Mytilene in protest of conditions on the island, which they have now been doing since the 20th October. For now they are determined to stay until their demands are met. The protest is entirely refugee led, and is to a big part moved forward by a group of refugee women and girls. They demand freedom of movement for all refugees trapped on Greek islands and decent living conditions outside of the camp, especially for the women and families. Currently, 5500 refugees on Lesvos are forced to stay in the state run camp called "Moria". In the last two months several thousands of people arrived new, mainly women and children. They are forced to sleep in flimsy summer tents without protection from the cold and without a door to lock to protect themselves from violence and assault. After an outburst of violence in the camp two weeks ago many families left the camp and started this still ongoing protest. We have been supporting them with food and blankets since the beginning. Additionally to the hot food we are providing them boxes of ingredients that allow them to prepare their own lunch autonomously, as well as tea, sugar and non-food items for 9 protesters that are on hungerstrike. This support has enabled them to continue the protest as long as it’s necessary and prevent them from returning to the horrendous conditions in the state-run refugee camp to queue for hours to get food or a cup of tea. Since we started supporting this protest we are spending more money than usual and are currently at our financial limit. To be able to continue we will need additional support.