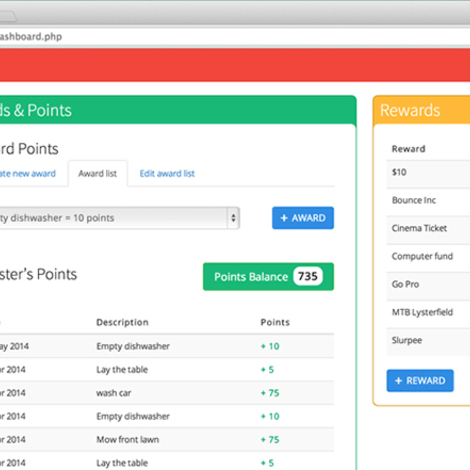 PointsThing started as a spreadsheet, we would award our children points for good behaviour, completing chores and for achievements. We would then let them redeem their points for treats, such as a pony ride for Elodie or cinema tickets for Louis.

My wife Emma had the idea to turn this rewards idea into a web app that could then be shared with other parents. So I spent about a year planning and building the web app in my spare time, we have been using it at home and it's working really well. Elodie is actually kind of obsessed with earning points!

Once a parent has setup an account, they are able to add children, there is an option to create a login for each child. Parents can discuss what rewards their children would like added (a reward is a treat) and set a points value to each reward - e.g. Pony ride = 200 points. Next awards can be created, an award is a points value that is awarded for an achievement or completion of a chore - e.g. Empty dishwasher = 10 points. If a child has earned enough points then they are able to claim their reward.

When a child logs in they are able to view their points statement and points balance and see their rewards and how many more points are required to be able to claim rewards.

We have noticed some awesome benefits other than house hold chores being completed without having to ask! School grades and general behaviour are improving and they're learning to save and to set goals.

I've had a few tech savvy parent friends test PointsThing and have had some great feedback, with some fab ideas for improvement. One of the things that has come up a few times is that the interface needs to be made more fun for children.