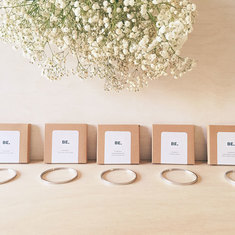 I can say, hands down, that 2014 was the toughest year of my life. I thought I'd hit rock bottom before, but honestly, 2014 smacked me down.

In short, my 3 year relationship ended. I moved into a house on my own. My co-founder decided to exit my current business (on fairly icky terms), the new house I moved into was making both me and my dog incredibly sick (mould and damp problems) and on top of that I hated my body. My self-esteem plummeted.

By the end of 2014, I was in a dark place and I needed SOMETHING to pull me out.

I stumbled across this quote that said "She Believed She Could So She Did"- and it became my rally cry. I figured if I could just start believing that I was worth something, my life would turn around.

I wanted to tattoo the saying on my body, but it felt a little too permanent, so I decided to create a bangle that I could wear instead.

Did you know we're exposed to more than 5,000 advertisements every day? Most of them implying that there is something wrong with us. We're not skinny or pretty enough. We need to eat less and buy more.

Rates of depression among women & girls have doubled in the last 10 years, and the leading cause of death for girls aged 15 - 19 is now suicide. Women & girls hating who they are, because of the messages they are surrounded by. We are here to change all that.

Be. Bangles are simple and beautifully designed stainless steel bangles, engraved with inspirational sayings like ‘She Believed She Could So She Did’. They inspire women across the world to stop doubting and start believing in themselves. We're here to remind women of their greatness, especially in those moments they've forgotten how extraordinary they are. Each bangle sold not only empowers the woman wearing it, but it funds a day of education for a girl in Africa as well.

We're creating a movement of empowered women committed to shifting the beliefs they have about their bodies, their careers and their so called flaws.