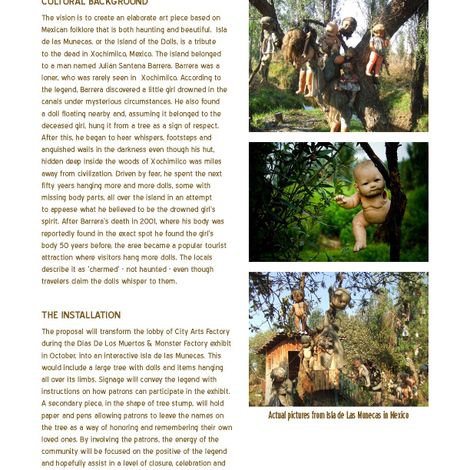 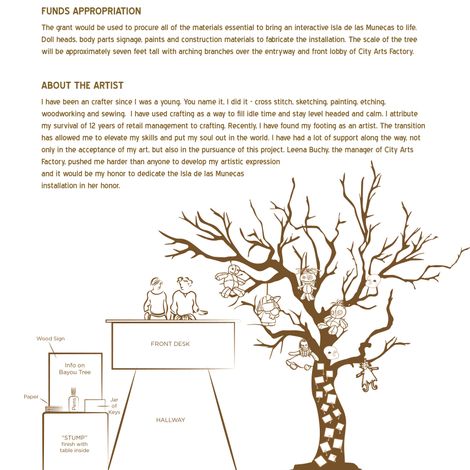 Cultural Background
The vision is to create an elaborate art piece based on Mexican folklore that is both haunting and beautiful. Isla de las Munecas, or the Island of the Dolls, is a tribute to the dead in Xochimilco, Mexico. The island belonged to a man named Julián Santana Barrera. Barrera was a loner, who was rarely seen in Xochimilco. According to the legend, Barrera discovered a little girl drowned in the canals under mysterious circumstances. He also found a doll floating nearby and, assuming it belonged to the deceased girl, hung it from a tree as a sign of respect. After this, he began to hear whispers, footsteps and anguished wails in the darkness even though his hut, hidden deep inside the woods of Xochimilco was miles away from civilization. Driven by fear, he spent the next fifty years hanging more and more dolls, some with missing body parts, all over the island in an attempt to appease what he believed to be the drowned girl’s spirit. After Barrera’s death in 2001, where his body was reportedly found in the exact spot he found the girl’s body 50 years before, the area became a popular tourist attraction where visitors hang more dolls. The locals describe it as 'charmed' - not haunted - even though travelers claim the dolls whisper to them.

The proposal will transform the lobby of City Arts Factory during the Dias De Los Muertos & Monster Factory exhibit in October, into an interactive Isla de las Munecas. This would include a large tree with dolls and items hanging all over its limbs. Signage will convey the legend with instructions on how patrons can participate in the exhibit. A secondary piece, in the shape of tree stump, will hold paper and pens allowing patrons to leave the names on the tree as a way of honoring and remembering their own loved ones. By involving the patrons, the energy of the community will be focused on the positive of the legend and hopefully assist in a level of closure, celebration and respect for their loved ones.