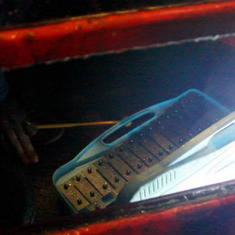 Okay, so in short, we squish entire bands into the few remaining red phone boxes in Liverpool. I went through my teens watching YouTube videos from La Blogotheque's Take Away Shows and NPR's Tiny Desk concert, wishing I could've been there or imagining what it would be like to play. As much as I love La Blogotheque, it only serves as an alternative platform for established performers. I remember setting up Sofar Sounds Bristol, but out of five acts, my boss only agreed to one act from Bristol, and brought the others in from London. It felt unfair. And it still restricted the audience to the attendees or those who already knew of Sofar.

At the same time, venues everywhere were (and still are) closing down. However, fantastic musicians are down at your local pub, they just haven't had the right platform to get noticed. We hear this argument thrown about every now and then, but the option organisations typically go for is a city festival or a local zine, still limiting the audience and keeping it local.

Now, our aim is to provide a platform akin to the quality and followership of Tiny Desk or La Blogotheque, but showcase our region's 'one's-to-watch'. The content sparks interest; we literally squish a whole band into a K2 or K6 phone box each week, interview them over the phone and record a stripped, improvised version of one of their songs. It highlights a different side of bands and so far we've had people swap guitars for vocal harmonies or melodicas, replace drums with gradual tearing of the pages in a phone book to create rhythm.

K2 is the box, AV is Audio Visual. Why the phone box? They were designed by the same architect of the Anglican Cathedral, and every year, more and more are being torn up from the streets. They're British icons, but they're going into such disarray. We bring life to these quintessential kiosks, we rally crowds for Liverpool's talent and we boast the music scene of Liverpool with its touring acts.

In short, we show bands in a box.