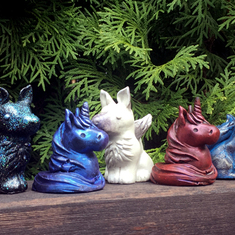 Finders Creatures is public art piece based around a treasure hunt. I have been hand-sculpting small beasties that I have begun casting in resin-- right now I have made molds of the unicorn and the wolf, but I have several more creatures in the works I'd like to add to the lineup. I plan to cast 200 pieces in a range of colors and finishes and hide them throughout the city for people to find and keep. Each one has a seal on the bottom, identifying the project and inviting finders into the larger experience.

In addition, I'm building a progressive web app as the hub of the hunt. It is accessible from computer, tablet or phone, and can be downloaded on to devices the same as a native app an, but without the middleman of the App Store.

Within the app, participants can:
-See progress and behind the scenes details in the Beast Factory blog section
-See the current hunts and their clues
-Comment on hunts and clues
-Be alerted with push notifications when a new hunt is live
-Submit pictures of their finds
-See locations of clues and creatures on the live map
-Support the project through Patreon
-Adopt a beast of their own through the online shop

I've done public treasure hunt projects before, but have always had to rely on Instagram for clues and communication. I'm so excited to build one that has its own app as a home base I can customize and use to really draw players in.

I'm a firm believer that we need to create space for magic and play in our lives. Finders Creatures is designed to allow me to do just that and also share it with others... I mean, really, who doesn't love a good treasure hunt? Especially when you are rewarded with unicorns?